Hey Ruth!
I’m sitting here in a kind of trippy just-vaccinated mid-heatwave jelly, which is a state I’d really recommend for your work – the slowness and sensual attention
to texture and colour feels like delicious moisturiser for the brain.
Throughout last year there was so much video art made available online, some platforms did it really well and others not so much. But it was really difficult, at least for me, to engage with these works in the domestic environment, specifically to choose the moment in which to press play, to commit to time for the mind to wander without distraction. So this invitation, when you said, ‘you should be sitting in a dark room with headphones’, I thought, I would so love to have that scenario presented to me outside of my own house! Walking into the gallery with no expectations and no time constraints, and more to the point without having to be the one to direct the moment of encounter with the work. I think that that still point of the urban meander, the place to pause and observe and be surprised, has been a central part of most
of my most exciting art interactions.
Right now they are stripping a flat in my building and as they haul everything outside – fittings, cabinetry, picture frames, toilet – another team is waiting to strip what they leave by the trash, efficiently separating anything wooden, anything metal, screws and bolts. More teams will come through the evening to strip more components from the pile, until eventually the garbage trucks will come and take what’s left.
When I think about your practice I relate it to this habit of scavenging or, more romantically, a kind of game of chance played with the city, particularly with walking and using art as an excuse to go places and find things that are outside your usual routine. In some of these videos I can feel your curiosity taking you places, and you stretch into the space of encounter to find the points of inflexion. Of course research also plays a big part, but I get the sense that you are following your nose too. So I guess my first point of conversation would be – what does it look like for you at the beginning of making a work? Are you setting out with a theme or a particular scene in mind, and follow this instinct?
Talk more soon
xM

Hi Maddy :-)
Thanks for your thoughts. I am travelling on a train through London in the wind and rain. A sweaty heatwave by the sea seems very far away.
It’s an interesting question, I guess I’ve never thought too much about where my videos start before, how much of it is instinct and how much of it is
directed by a desire to research something.
I’d say it’s a mix. Which seems a bit non committal, but some of these works are led by an experience – like being prescribed a mindfulness course by the National Health Service (NHS) – and then some are led by the need to propose a project for something. Like when I applied to Arcus Residency in Japan, where I made the video work Swallow Up.
I think many people would think the latter is a fraud and takes away some romantic idea they have of an artist just following their nose wherever it takes them. But for work I often produce video content for other people and in this instance, I will be handed a strict brief to follow. I often find myself most creative within these restrictions. So with Swallow Up, I’d essentially set myself a brief
by writing a proposal for the residency.
Instead of being limiting, it actually became more free and fluid. I wasn’t restricted by having an opinion or belief I held tightly. I was in Japan to learn, interviewing space psychologists and astronauts, being guided by their experiences of the world. Digesting that and then seeing where it took me.
I like the idea of you engaging with these works in the domestic environment.
The combination of a dirty mug in the sink and the darkest depths of outer space is kind of what I am going for.
Not that I assume your sink is full of dirty mugs.
Lots of love x

Hey Ruthy!
I had a conversation with a friend recently who said they ‘felt like they understood the life of an artist’ during lockdown because all their routines and office-related rituals were taken away and they were in this limbo of reimagining how they would spend their day if they could…
(Apart from kindly pointing out that most artists have jobs as much as anyone else and might have been preoccupied with more pressing things than rearranging their daily routines).
BUT I do love the idea that more people are recently experiencing the weird vocations of making tiny things beautiful, making ugly things interesting, and having all this loose flabby time in the day to be obsessed with things… It seemed like a perfect moment to be in the world of your works, which have this hyper-view of contemporary living and how our intimate habits are mediated by various
platforms, social media among them.
That it’s both stupid and profound, like the infinite of outer space and a dirty coffee cup, like the raisin in the hand; this ability to look at contemporary culture
as both completely banal and also very sweetly telling of our human needs and desires. Your gaze on this ephemera isn’t satire or snark, it’s a loving pointing
finger, saying um! what! And wow!
Like the food prep video I saw of yours – is so simple and yet so addictive — these patterns and learned tropes of behavior that, viewed from outside this community make absolutely no sense and yet have a kind of mesmerising rhythm to them, like the dog whimpering as its hair is cut, both pathetic and soulful.
My recycled toilet paper packaging features a cartoon Earth with eyes and a nose and a speech bubble saying BE A NICE HUMAN. Somehow the annoying profundity of this like an nhs-mandated mindfulness course reminded me of you.
And I haven’t been able to spear half a cherry tomato with a fork with quite the same confidence since.
More soon!
xx

Dear Ruth,
More thoughts, somehow I can’t help but want to update you on the climatic situation, so very important (as we know) as an art-viewing media, a screen thru which everything appears, disappears, or gains colour… last I wrote I was coming off the back of a week of ‘Saharan dust storm’, that choked the throat and made every task impossible, the sun very yellow through the clouds, and
a heat that hung stagnant without any pleasure or release.
Your videos always have this kernel, I think, of interest of the researcher or the casual encounter – as you said, having a constraint is freeing, rather than limiting.
I guess that was what I was trying to point to above, about using art as an excuse to do things that you wouldn’t ordinarily do, but that you have this inkling about – like the astronauts in Japan.
(remember when we went together to the church where they speak in tongues? and we weren’t distant, we were really in that moment of intensity, fear and oblivion!)
I think you also often hide or slide around your own involvement — for example, researching phobias, but making a work that wasn’t about your own phobia, or being sent to the mindfulness course and recreating it with actors for the video; reframing it in a humourous or uncanny way. I like that you said digesting, it seems like a common theme! Digestion or even failure to digest, like the weird kind of swerve in the belly when the salad-eating cuts to the tomatoes being painted. Creating these situations of uncertainty or uncanniness of contemporary life, particularly as it relates to things that are supposed to make us feel good.
One of the astronauts says ‘Because there is no atmosphere the stars don’t twinkle’… can’t stop thinking about this line. Like it kind of stops the brain – trying to imagine this constant beam of light rather than the humming of stars as we see them on earth. Recently (because of Simone Biles) I learned about this thing that gymnasts call ‘the twisties’, where your mind and body lose their connection, and you’re flying through the air disconnected from space and time. I was thinking about this in your recurring use of infinity, space, and oblivion, something otherworldly but also (in your work) strongly tethered to or caused by the normal happenings of the everyday. There are these moments of discomfort, like a skipped step in the dark. In the mindfulness course all the clocks are telling different times, and in Swallow Up, at the end my internet went for a second and the last words on the black screen went blurry, for a minute I thought the fog was on purpose, the words drifting right off screen…
xxM

I love that the recycled toilet paper cartoon person made you think of me! I like those moments when you stare at an advert, a plug hole or feet for a little too long and it all starts to seem ridiculous. I think everything is absurd when you think about it for long enough and especially when it’s also telling you to ‘BE A NICE HUMAN’ in capital letters.
Especially sometimes when I get panic attacks. In these moments I curl up on the floor and bury my head and hyperventilate. Everything becomes incredibly insular and all I can think about is how I am feeling. I get totally consumed by negative thoughts, spinning round in circles. But very occasionally something completely silly or mundane or absurd pops into my head. Like out of the corner of my eye I’ll see a cat toy on the floor next to me that is the shape of a fish with googly eyes. And it’s staring at me. And I’ll stare back at it. Facing it down, lying there, panicked, in a staring contest with a stuffed fish.
And I recognise that having time to overthink my own negative thoughts is also sort of a privilege, and in the grand scheme of things I am panicked about not much at all. But then is the absurdness of daily life, the presence of the 24 hour news cycle, the corresponding twitter commentary, the impending climatic oblivion and going to work everyday doing things you don’t enjoy just to spend all your money on rent and bills and essential things we need just to live ‘not much at all’?
I guess what I try to do in my videos is hang out in those uncanny moments, stare at the stuffed fish and laugh.
Anyway, I’m not making much sense so I better go and start practising some flips so I can experience these mythical twisties.
Thanks for all your thoughts Maddy. I hope travel resumes and you can come visit the show.
Ruth xx

Love this! I think we should title this conversation ‘a staring contest with a stuffed fish’.
I have totally been in that situation — the depth of despair and anguish, and then suddenly you see the dog with a feather stuck on its nose and it’s like, oblivion or not, here we are.
Without being too wellness… I haven’t progressed to flips yet but I have been doing a lot of handstands — really helps with the sense of impending doom!
I hope I can see the show, and you, soon too
xxxx!!

Over de correspondent: Madeleine Stack is an artist and writer. Publications include Hotel, BOMB, aqnb, Another Gaze, Salt, un magazine and Doggerland. In 2019, Portable Monument, their longform audio essay on intimacy across hemispheres, was commissioned by ICA and the BBC for national radio broadcast. 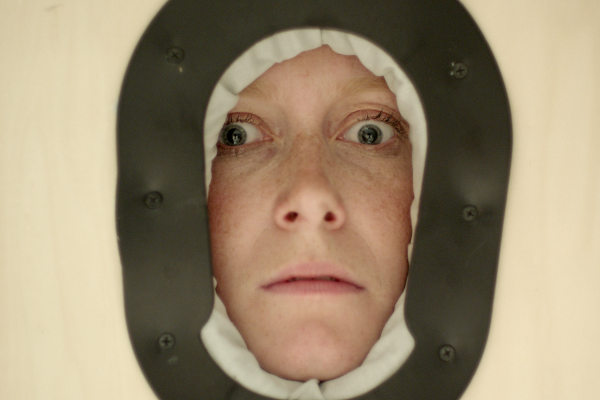 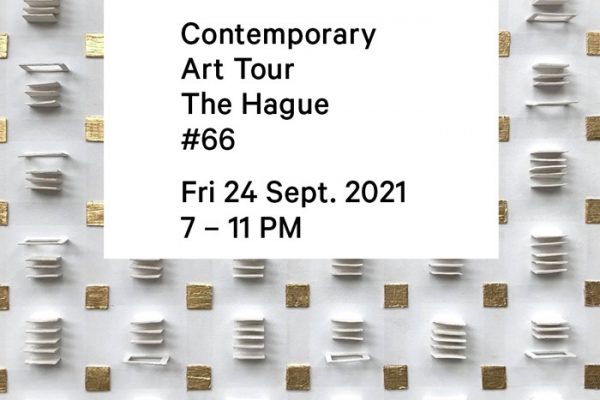 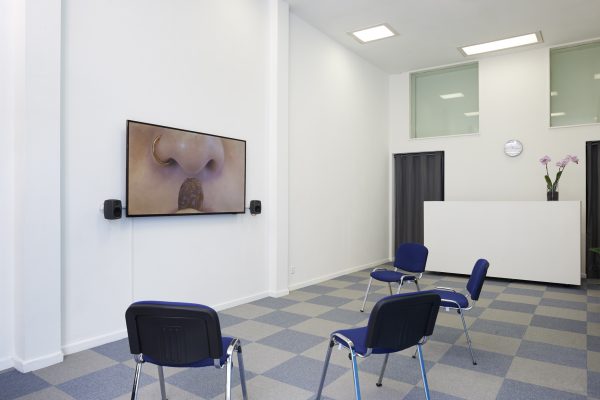