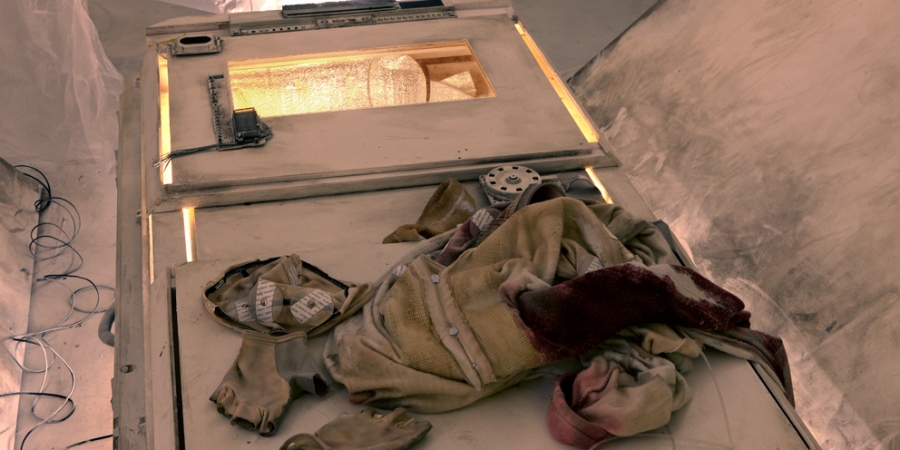 For Sam Keogh’s first solo show in the Netherlands, he presented ‘Orbital Debris’ — an installation of film and sculpture with an ambient soundtrack made in collaboration with The Iduna Institute for Strategic Imitation & Delay.

‘Orbital Debris’ takes its name from the scattered remnants of old satellites and spent rocket stages which constantly orbit the earth as space junk. This exhibition is composed of the fragmented parts of two recent mixed media installations; documents, remnants and research drifting through the medium of The Iduna Institute’s ambient soundtrack.

In one film, ‘Kapton Cadaverine Log Entry’, a handheld camera skims over the interior of a starship: various textures and surfaces glisten in the light of the camera as the ship’s lone inhabitant struggles to locate himself in time and space. The film’s narration shifts in and out of diegesis with the images, mirroring the layered registers and temporal confusion in the dialogue.

In another film – ‘Integrated Mystery House’ the ship’s inhabitant appears in front of the camera. He is filming himself rehearsing a rambling and frenetic presentation about his alterations to a huge defunct control panel – a series of intricately made collages and semi-translucent sculptures. These objects are described as a mind-maps, connecting fragmented memories of a trip to Silicon Valley, a labyrinthine Victorian mansion built by the guilt ridden widow of a rifle maker and haunted by the ghosts of the gun’s victims; immigrant workers in Intel’s microchip fabrication labs made faceless by their clean-suits; the Nazi V2 rocket and its links to Bowie, Disney and Elon Musk. Through his discordant presentation to a hallucinated audience, disparate narratives and anecdotes are soldered together into a prototype for a new kind of integrated circuit.

A specially commissioned soundtrack weaves through booth space, each song is made with a specific element of Keogh’s work in mind and molded through conversations and emails during the course of the residency at 1646. The soundtrack becomes a kind of binding medium, helping the fragmented elements of the show cohere into an exhibition-as-film.

Keogh was born in Ireland in 1985. His work spans installation, sculpture, performance, drawing and collage. His installations often facilitate a performance which morphs sculpture into props and collage into mnemonic devices or surfaces to be read as visual scripts. These scripts take the form of dramatised, rambling monologues, densely packed with references to popular culture, wikipedic ‘factoids’ on various topics, politics, history, anecdotes and descriptions of physical and chemical processes. Through performance, the dialogue, collage and sculpture become knots saturated with confused information. They are Keogh’s attempts to make information tangible and malleable until it can be treated as a sculptural medium; to make something epistemic into something haptic.

The Iduna Institute for Strategic Imitation & Delay is based in Amsterdam from where it “pursues a programme of sober renovations upon the world-spirit.” 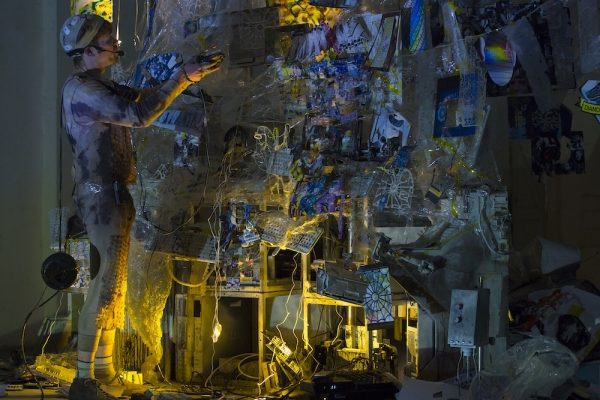