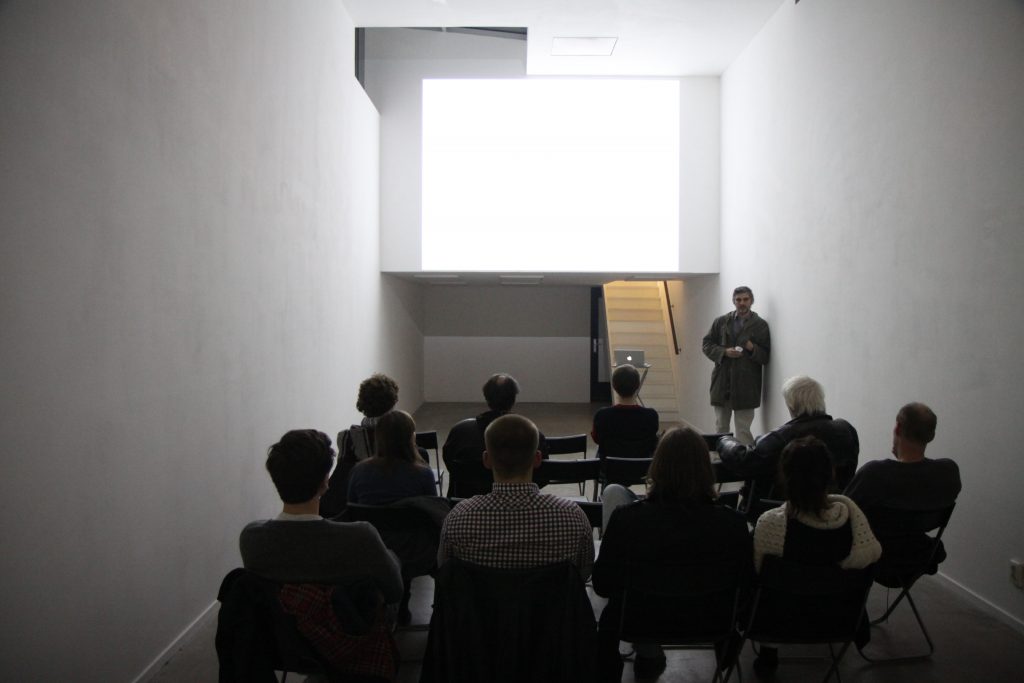 A text by Elena Filipovic:

Typically, the work of art is present and visible, it is shown in an exhibition. Such is, after all, the idea behind the act of “exhibiting” (verb. to demonstrate, to put on display). Beginning and end dates define the duration and the gallery’s (often) white walls establish the site of the work’s presentation as part of an exhibition.

But what if the show opens and then closes and a participating artist’s contribution — listed somewhere so that there is seeming evidence of its existence — couldn’t be seen or otherwise aesthetically experienced?
What if it will only exist as such, which is to say, as an aesthetic object, at another time and in another place and yet its participation in the exhibition (and your participation as the visitor) is crucial to that existence?
Could one consider that it had been exhibited there and then, at that moment and in that space of the exhibition when you saw it on the work list?

These and other questions haunt the work of Croatian artist Tomo Savic-Gecan. Time and space (architecture is again and again probed in his questioning) as well as the object (the “work of art”) and the experience of it are often dislocated and disconnected in his various projects.

Visitors that entered an exhibition in Utrecht unknowingly set an escalator in a Zagreb shopping mall in motion (untitled, 2001). Each visitor in an art center in Amsterdam was asked to decide on the entry price for the visitor that would come in next (untitled, 2002). People who called a New York exhibition’s information number heard the curators’ interpretations of a work of art that had no material existence except insofar as the communication about the non-existent work, as one critic has pointed out, conjured its existence in print and through reference to it over time (untitled, 2004; some references ex nihilo endowed it with the title,Phone work).

For a recent solo show in Brussels, the front window of the artist-run space was removed and sent to a Slovenian factory where it was transformed into 150 banal-looking drinking glasses; these were then sent back to Brussels and used for drinking during the duration of the exhibition in which the windowless opening was the evidence of what had taken place before the show began in order to constitute the “work” when the exhibition finally opened (untitled, 2005).

In Venice for the current biennial, a line of text was placed on an exhibition space’s wall; it recounts that the number of visitors at that very moment entering an art center in Amsterdam impacts the temperature of a public pool in Tallinn (the pool having been programmed to receive the real time information and alter its temperature, ever so slowly and perhaps altogether imperceptibly, but nevertheless for real) (untitled, 2005). Between present and future, here and there, gallery space and shopping mall/telephone line/public pool/factory: distance dissolves and time stutters.