There are Shitty Jobs Everywhere; That’s My Freedom

AU TRAVAIL / AT WORK is a project based on a call for collaboration which is open to all. This experimental project urges artists and workers to consider their workplace as a site of artistic residence. The space of reflection, production, or intervention becomes the space of the employer.

The members of the collective appropriate the culture of work within their daily lives and, ultimately, they produce themselves by making use of the cultural and technological means that are available to them in the workplace.

The workplace is considered as a field for experimentation and discovery wherein the conflictual relations arising between private Utopias, collective necessities, and economic realities are unfolded.

The members of the collective capitalize on the individual worker’s right to manage his or her own free time, by means of the re-appropriation and self-valorisation of such time.

Au Travail-At Work was invited by The Hague’s artist run center 1646 to actively operate in the city for a month and a half. On the 24th of October Au Travail-At Work officially opened its headquarters to the public, a temporary job center in the center of The Hague, together with the world-premier screening of a documentary about the collective’s history and its future developments towards autonomy.

During its residency, Au Travail-At Work organized several side activities as for example competence-sharing days, and it ended with a closure event on the 14th of November to show the results of the residency. 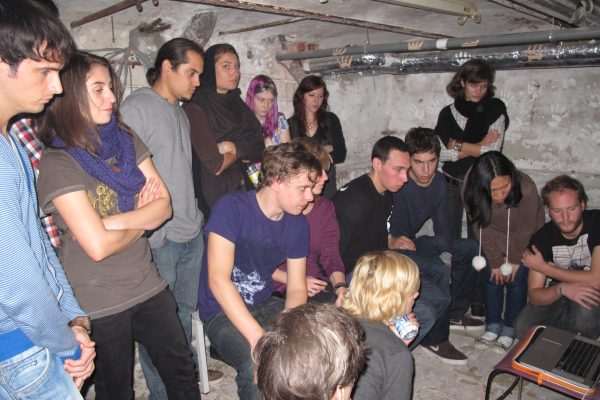