Fast Is Good For Us 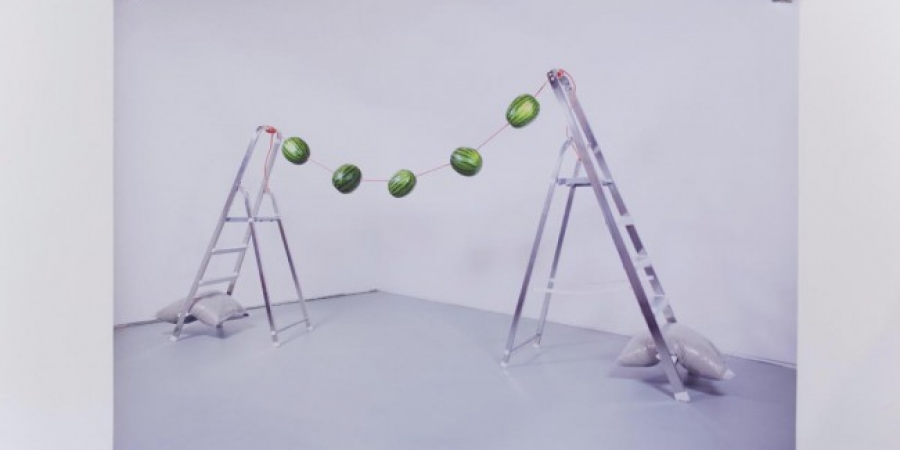 Four recently graduated artists, Bernice Nauta, Inge Thoes, Victor Yudaev and Fraser Stewart were invited to create new collaborative work or work that somehow arises in conjunction. Having worked together on the precondition that nothing is prepared in advance, the focus of the show was on exploring and testing the format of a group show. The exhibition was not static but a continuing developing process, each week resulting in a new presentation. These weeks were an intense time characterized by much dialogue between the artists. This resulted in subtle influencing each other’s practice, while working on their own project.

The choice for these artists is based on a common trait in their approach of working, that is open to react to and engage with their surroundings, that is able to improvise and adjust, even though all four practices are very different from each other. These differences might create new mergers, conflicting situations or interesting dialogues between perhaps isolated loners.

Inge Thoes, graduated at the Rietveld Academy, has a sculptural approach with which she focuses on combining objects, materials and pictures that call for unexpected contradictions. Clichéd and iconic images are an important source for her work, using objects and materials available to her, changing their meaning by changing their context.

The work of Bernice Nauta, graduated at the KABK Den Haag, mostly consists of drawings and animations. With an animistic view of the world Nauta responds to the ‘behavior’ she observes in matter and thoughts, like someone behaving like a stone or landscape being shy. In her work she seeks the similarities between the two forms of being, the inner and the physical being.

Victor Yudaev, also graduated at the KABK, works on a much larger scale, creating large sculptural installations that often occupy the complete space that is at his disposal. He creates an environment in which many different stories can be traced. Everyday objects encounter each other like a roll of tape, a cigarette box, a pinocchio puppet, sunglasses, a lemon juice container with the shape of a lemon, seemingly left behind or waiting for a narrative to make sense. At other spots in his created architectural structure objects are carefully put together as if they are performing choreography, telling a well put together story. The objects expand to the size of a box and the room stretches to the size of a mind.

Fraser Stewart, earned his Master of Fine Arts at the Dutch Art Institute, uses performance and video to create ephemeral events for his audience. In his work he explores questions and issues around failure: what does it mean to fail? What does it mean to attempt to fail? What happens when failure is represented? Failure is often involuntary. When one is aware of, or tries to perform a failure this implies a different set of issues. Among them – what happens when one represents or acts a gesture of failure or performs a failure? Differentiation between the event of failing and embedding it into an image, an artwork, or film produces varying effects, which may be comical but also critiques the situation.