1646’s Background Evening is an evening event curated and composed by the exhibiting artist, enabling us viewers to interact, to get a closer look and a better understanding of the artist’s practice, from an often unexpected corner. This time, by means of a party!

Being a self-taught artist, Janek’s artistic practice ultimately originates from the post-war underground rave scene in Poland in the 90’s, starting out as a VJ (video jockey, mixing videos for the rave parties).⁠

“Growing up in Poland in the 80s brought something that defined my anarchist-leaning political position – a deep distrust toward the state and its institutions. Communism in Poland had its ups and downs but the 1980’s was the time of its utter failure on all levels – morally, politically and economically. This resulted in the emergence of different kinds of informal economies. The 90s brought optimism and a kind of liberal enthusiasm – we had to work hard but everything was possible. I got involved in the underground rave subculture at that time. First just going to parties, then doing videos and helping to organise them. That was a defining, powerful political experience. We could build a space where people felt connected and happy without caring about the hierarchies of mainstream society.

DIY has countercultural roots for me. It allows us to create ‘parallel’ spaces, spaces which work according to different rules than the society around us. Some of my activities started from that way of thinking.”

One of those activities being ‘Goldex Poldex’: an art space in Krakow, active between 2008 and 2021, run by Janek and friends. The space focused on experimenting with funding strategies; looking for other profitable ways of producing art shows, like by playing online poker or smuggling cigarettes from Krakow to Berlin.

For his Background Evening, Janek invited Tomasz Kowalski, one of the friends whom he ran Goldex Poldex with. Tomasz is a visual artist and musician, whose paintings, sculptures and sound works combine the themes of nostalgia and anxiety and draw on elements of pop culture, questioning the perception of basic categories such as selfhood, space and time in the present conditions marked by the accelerated change.

On Saturday May 14th, Janek and Tomasz brought the early 2000’s Goldex Poldex party spirit to 1646 with a DJ set and an immersive video installation.

About Janek Simon: Simon (b. 1977) is a conceptual artist and an occasional curator based in Warsaw. The main motivation behind his work is curiosity. On a more concrete level he is inspired by travel, history of science and political ideas, and the practice and ethics of the DIY culture, always filtering the theories through his personal experience though. In recent years Simon developed a body of work investigating notions of distance and difference between places, working on projects that try to remap semi-peripheral position of Eastern Europe through geographical experiments.   Simon’s works were shown, amongst others, at Manifesta 7, Liverpool Biennale, Prague Biennale, and numerous individual exhibitions in major public art institutions in Poland and elsewhere (Arnolfini Bristol, Casino Luxembourg, Zacheta National Gallery of Art in Warsaw, CSW Zamek Ujazdowski and others).
About Tomasz Kowalski: Kowalski (b. 1984, Szczebrzeszyn, Poland) lives and works between Antwerp and Warsaw. He is a visual artist and musician. His paintings, sculptures and sound works combine the themes of nostalgia and anxiety and draw on the elements of pop culture, questioning the perception of basic categories such as selfhood, space and time in the present conditions marked by the accelerated change. Kowalski’s universe is oneiric and psychedelic. His work has been the subject of numerous solo exhibitions at institutions including: the Center for Contemporary Art Ujazdowski Castle (Warsaw) and the Contemporary Art Museum of St. Louis. His work has also been featured in numerous group exhibitions at venues including: Kunsthalle Wien, de Appel Art Centre, MUMOK, Centre Pompidou, MOMA Warsaw, and SMAK Ghent, Baltic Triennial. His works are held in the public collections of Centre Pompidou, MUMOK, MOCAK, Frac des Pays de la Loire, Francois Pinault, Boros. He is the winner of the Guerlain Foundation Award 2014. He runs Alicja, a radio show (at Radio Kapitał) and a music label releasing various artists and his own music and audio-plays.
E-mail conversation
Janek Simon in conversation with
Florian Weigl
Supported by
Sponsored by bitbird 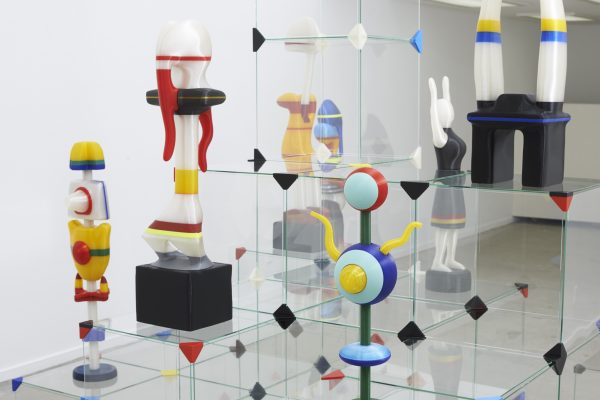