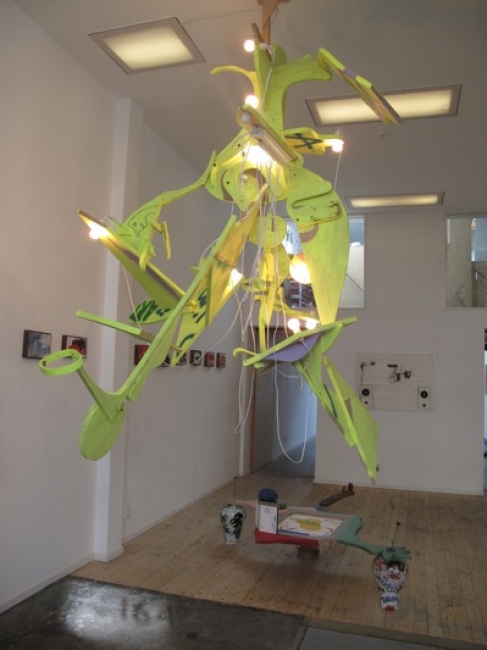 …there has been a slight change of the plan: FUCK […] has sort of hijacked the show, so it is no longer a solo, it is a double date of two loving couples exhibiting together. Me and Daniela Bershan plus Robert Dupic and his girlfriend Merdije Sheji.

from the original press release:

If travelling for me is a way to breath IN and take in information… NOW is the time to breath OUT and filter and play with all the information._ (Jonas Ohlsson)

The exhibition consisted of a new installation with Ohlsson’s latest drawings and porcelain works he produced in Jindezhen (China). The opening included a performance by DJ Lonely and Baba electronica, placing music as an essential part in Ohlsson’s multidisciplinary practice.

For Jonas Ohlsson, process is as important as the end result: The work develops itself, I can’t plan it, I can have a basic idea of where I want a drawing to go, but it’s like a football game, you can plan all you want, when the game is on, things happens by themselves.

In his work, free association draws from a chaotic melting pot of cultural and personal references. As much as different issues are mixed, his use of different mediums together, breaks “open” the exhibition format, going from drawing, sculptures, installation, text to music.

From his background as an electro musician, Ohlsson composes his visual work in a similar way, in which meanings are layered, becoming something different from what they would be separate from each other. A visual rhythm between the combined parts keeps the piece together becoming a new experience on its own.

By the use of text or literal references from political situations to very personal feelings or reflections, Ohlsson anchors the experience the work transmits to a very accessible scale for an audience since they might connect to similar ways of feeling and thinking.

After an intense year of travelling around the world and having new experiences, Ohlsson finds himself in a moment of concentration and intense production, to put out in new works all the things that stayed behind in him and left a trace: from Rio de Janeiro and its … favela scene and baile funk, filled with machine guns, loud music, hot girls, coke and weird architecture, the torture debate in USA which the artist visualizes as … Cate Blanchet in Lord of the Rings as a holy white elf-angel torturing little orc-muslims, to coming back home with a feeling of being rootless, wondering where his real home is.