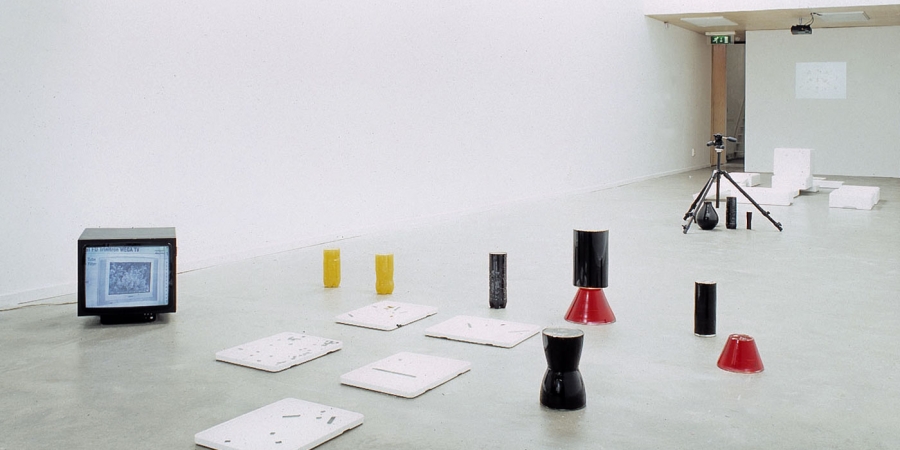 Several polystyrene foam boxes filled with water, the same boxes Brazilian street vendors use to keep their beers cold. There are snippets of a videotape floating in one of them, fragments of a photograph in another. In a third box are three floating cans of soda, talking to each other. The water makes the contents of the boxes move around, constantly changing their composition.

At first sight, Daragh Reeves’ work seems literal. The images and combinations that he makes often appear blunt or brutal: what you see is what you get.

Yet, when looking at them for longer, they don’t seem to fully reveal their meaning or intention. It’s just as if they were caught in the middle of an act.

If on one hand film and it’s imagery is a recurrent source of inspiration and confrontation within Reeves’ work, it is this medium’s fleeting quality and its capacity to offer a layered, multifaceted view that influences what he’s looking for in other media and materials too.

His drawings, photos, sculptures, installations or videos, bear the evidence of a keen eye for timing: an ability to recognize when an image becomes visually autonomous, a law unto itself.

Such sensitivity of the eye in its look on the moment has been further influenced, this time, by the artist’s recent experience in Rio: […] where I lived for 6 months. It is maybe not just the street as one could talk about it in New York etc, but also the subversive effect of nature ( the beach, the beauty ) on the idea of work in the city […] and how this in turn can affect, unexpectedly, one’ s position and attitude as an artist. An otherwise unimaginable way or change in thinking and feeling that travel can induce or introduce. […] a new language emerges.