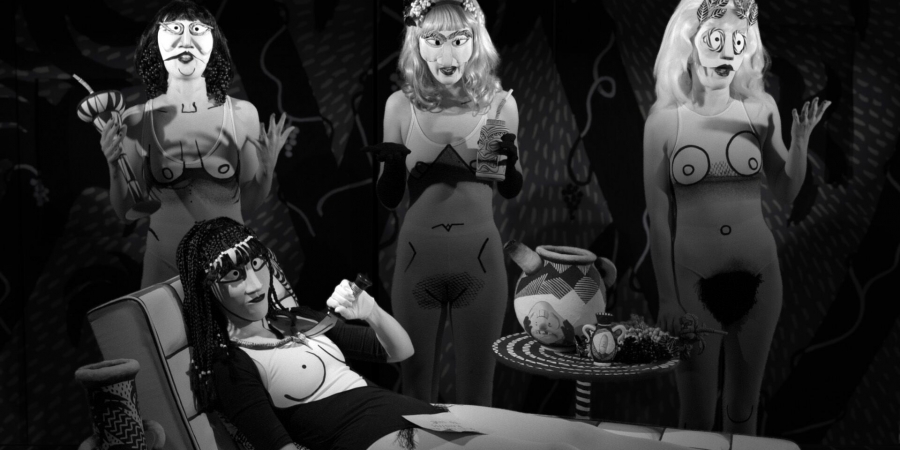 During the second edition of The Hague Contemporary Art Weekend, which took place from the 5th until the 7th of July  2019, 1646 presented three video works of Mary Reid Kelley.

The festival kicked-off on Friday the 5th of July at 17:00 hrs, with the opening of the Graduation Festival of the Royal Academy of Art The Hague (KABK Den Haag).

Priapus Agonistes (2013) condenses elements of Greek drama and mythology with details of the church volleyball tournament that the artist remembers from her childhood. The Minotaur is re-imagined as a lost daughter in a labyrinth in a gymnasium basement, her sacrifices coming in the form of members of the losing volleyball team. Like Jorge Luis Borges’ portrait of the Minotaur as antihero in The House of Asterion, the Minotaur of Priapus Agonistes is hopelessly lost in an environment of repetitive space, using the murdered sacrifices as landmarks to help her navigate a path to the lavatory.

Swinburne’s Pasiphae (2014) follows Priapus Agonistes (2013) in an ongoing trilogy that explores the mythological Minotaur’s tragic family tree. For the first time Reid Kelley adapts an existing text, using Victorian poet Algernon Charles Swinburne’s dramatic fragment Pasiphae to tell the unlikely story of the Minotaur’s conception. Unpublished during Swinburne’s lifetime, probably due to its shocking sexual theme, the poem stages an interaction between master artisan Daedalus and the Minotaur’s mother, the bewitched Minoan Queen Pasiphae, who is cursed with an insatiable wish to mate with a beautiful bull. Symbolising, respectively, reckless creative power and the torment of unfulfilled desire, Daedalus and Pasiphae indelibly dramatise the complex collaboration of artist and audience.

The Thong of Dionysus (2015) ends Mary Reid Kelley and Patrick Kelley’s long-running exploration of self-deception, betrayal, and family. The delusions of love are central to this last film. Sent into the Labyrinth to destroy the monstrous Minotaur, the hero Priapus falls in love with her, and dies. The marriage of Ariadne to the wine god Dionysus, celebrated by Titian, takes a darker interpretation here. Dionysus and his supporting cast of Maenads advocate throughout the film for the dissolution of the self in wine and revelry. Voicing and acting every character herself in a feat of transformation and endurance, the culmination of the trilogy marks the end of Mary Reid Kelley’s significant update to these ancient themes.

Other participants of the The Hague Contemporary Art Weekend were:

About Mary Reid Kelley combines painting, performance, and a distinctive wordplay-rich poetry in her polemical, graphically stylized videos. Performing as a First World War soldier, a grisette in revolutionary Paris, or the Minotaur, she resurrects characters that embody particular facets of ideas in time. Her historically specific tableaux enclose dilemmas of mortality, sex, and estrangement, navigated by the characters in punning dialogue that traps them between tragic and comic meanings.
More
FULL PROGRAMME